The grammar in this lesson is covered in chapter 8 in pu, lesson 6 in Pije, and page 6 in Lentan.

There are five words in toki pona that can fulfill the unique role as the head of a prepositional phrase, kepeken, lon, tan, tawa, and sama. This words also have roles outside of prepositions, for instance as actions or modifiers. Prepositional phrases can also act as the entire predicate.

These words have meanings outside of their prepositional roles as well.

If you know how to use prepositions in toki pona, then you’ve already done the hard part of this chapter. Preposition glyphs work like li or e, in that they are containers for the objects of the prepositions. The only new things here is that they can also appear as glyph blocks by themselves and they all have ‘heads’ that can change orientation.

Before we go any farther, it is important to become aware of the anatomy of the preposition glyphs. Each preposition can be thought of as having a ‘head’ attached to an expandable body.

It doesn’t matter if the head rests on the left, right, top, or even the bottom. It will still be read the same. This allows greater flexibility in getting shapes to fit next to each other.

As you know, toki pona words often fit into more than one category. If prepositional words are acting as verbs, adjectives, etc. they behave like any other glyph block.

Just rotate the head of the glyph to the position where it is most legible. Often the best position will be over the side of the rest of the sentence block.

He we can see the top of lon rotated out the left side of mi lon e sina and the hand of kepeken popping out under sina in sina wile kepeken e ilo.

When glyph blocks are used as a preposition, they expand to surround the rest of the prepositional phrase. This includes all of the modifiers if there are any. 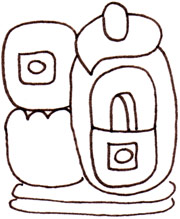 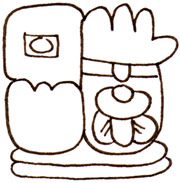 working as both verb and preposition

Glyph blocks also work as containers when they function as both a verb and preposition. 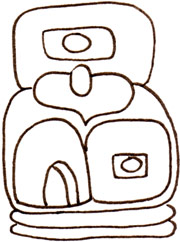 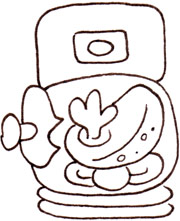 Again, the entire prepositional phrase fits into the prepositional glyph. In the next lesson, we will continue to work with prepositions, and look at the rest of the glyph block which have the ability to work in this manner.