The words in this lesson are covered in the following chapters in pu, Pije, and Lentan.

If you’ve made it this far, then I’m going to guess you’ve heard this at least once: “context matters”. Usually this means “how you would say that depends on context”, but there is another side to this: you the toki pona speaker often need to actively provide context. This may not mean describing exactly what you are talking about, but rather differentiating it enough from other things that what “it” is can be inferred.

There are many ways in toki pona to focus attention down to a subset from a much larger group of possibilities. Once you add prepositions, la, and pi to your grammatical arsenal, your strategy will expand tremendously. But with a few more words and your current understanding of modifiers you can already get really far. In this lesson we are going to focus on how to communicate by including or excluding people, items or qualities from a range of possibilities.

There may be two ways to spell it, but only one glyph block for ale/ali. Just like the modifiers we have already seen, it follows normal block order rules. ale as a head noun implies absolutely everything, as a modifier it includes everyone or every instance of the head noun.

We introduced ni when we first started building basic sentences, but it bears reintroducing it here. Not only is it great for pointing out “this one”, or “that one”, but it also helps join discussion of an object through multiple sentences.

As a modifier I will often flip the ni glyph so it can get right up close to the head noun, but this is purely stylistic.

As a modifier sin gives the sense of new, another, more

There are two things to note when working with sin, one of which you may have already noticed if you have spend much time looking at the syllabary. The glyph for sin is the same as it’s syllable equivalent, si with a suffix of n.

Take note again of the two variations of i within the glyphs above, and remember that the syllabary presents the simplified version, but both are used interchangeably in the glyph as well as the syllable. Your choice will most likely be determined by how small of a space you are trying to fit it into.

The other thing to note about sin is that it can naturally take on a rectangular proportion, something that we referred to as a short or thin block when first learning about modifiers. As sin is often used as a modifier, you will find comes in quite handy. 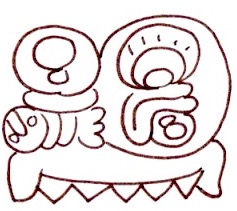 As a modifier, ante can indicate the other, or another. It can pair well both implicitly and explicitly with ni, but bear in mind ni means both “this” and “that”, so ante gives more a sense of “other”. 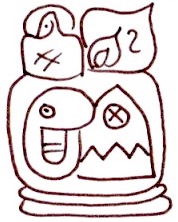 Uses as an action, ante marks a difference that exists through time. Be aware that by it’s nature this can create many interpretations for the same sentence.

taso as a modifier means “only”, so it limits the scope down to just what it is modifying. 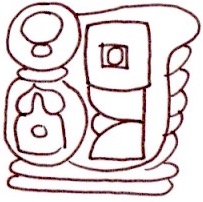 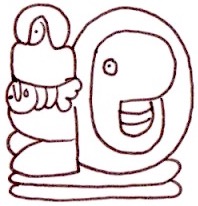 You will see taso used in a lot of toki pona groups to indicate that that group or channel is for interacting only in toki pona. The taso glyph rotates pretty freely, so if used as a modifier in this way it often sites comfortable on the bottom of the arrangement.

If you understand how modifiers work then negation shouldn’t be too much trouble, since adding ala to negate nouns or verbs follows the same block order rules.

If ala modifies the subject, as in jan ala (no one), it comes before li as part of the head noun:

To negate a verb, ala comes directly after the verb. And if it is modifying an action or a state of being infixed in li, so is ala: 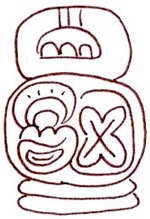 With toki pona’s limited vocabulary, using ala to modify becomes particularly powerful. For example, pona could potentially express cleanliness in context, but the exact meaning would be ambiguous. jaki, on the other hand comes much more limited in scope and jaki ala would almost certainly be understood to mean clean, without dirt, etc.

now compare your English translations to mine:

I don't understand you.

The new parent feels out of sorts!

Only the new person talks.

can you give two different translations for the following examples?

I changed something about my house / I moved.