Proper names are covered in chapter 9 in pu, lesson 9 in Pije, and pages 7 and 7a in Lentan.

To form proper names for people and things in toki pona, a capitalized word in used as a modifier to a head noun. The capitalized loan word can resemble it’s root as much as possible, but should be limited to the syllables we covered in the last lesson.

using the syllabary to write words and names

We are going to come back to syllables again, so if you would rather get started with the glyph blocks, feel free to skip or skim this unit for now. The reason I’m putting it here is because you are really close to being able to write your own name.

As you look though the syllabary, you will see several syllables that are toki pona words by themselves. Here are a few, see if you can figure out which words they are (hover over a spoiler box or tab through to reveal the answers):

It is always legitimate to substitute a syllable in for a word glyph block.

Other multi-syllable words can be created simply by adding syllables together:

Since this is a non-linear writing, we can’t just rely on space between syllable groups the way we do when using the Latin alphabet. There is a special capsule glyph we can use to group syllables into official words in a way that doesn’t require providing spaces. 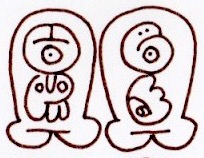 It comes in most handy if you ever want to use a toki pona words outside of pu, one that doesn’t have a unique glyph block

It is also useful if you want to talk about a word. Just as using quotes is never required but can add contextual emphasis: mi toki e nimi ‘lon’, you can use the capsule with nimi to place emphasis in the same way:

unofficial words with a head noun

The most common use of syllables is when we need to create unofficial loan words or proper names.

toki pona uses capital letters to distinguish these foreign words, here we infix the glyphs in a cartouche. It is similar to the capsule above, but it used for foreign words only.

Since all unofficial words need to modify a noun, this will often rest on top of the cartouche.