jan Iliana recently sent me a little piece of Bohemian Rapsody translated into toki pona with some beautiful shading.

open your eyes, look up to the skies…

Included was also a list of questions, which got me digging through some old journals and thinking about a lot of my original ambitions for presenting sitelen sitelen here for public consumption.

I have wanted to either finish the lessons continuing to follow the chapters in jan Pije’s original lessons, or else touch on upon the more important missing elements, maybe in some smaller “advanced topics”.

I’ve also had thoughts about delving into each of the glyphs too, and talking about their histories and variations. I’d be interested in having conversations about them that would continue to progress their evolution.

Here are the questions and a quick attempt to answer them, hopefully more to follow:

So is la a container or not? Even you use it inconsistently (lipu lawa pi esun kama vs. Balloon Boy interview).

Of all the missing lessons, addressing la is long overdue, and probably the first mini lesson I’d do if I decide to go that route. But in a quick answer it ca be either. If you look at the lesson 9 on the use of o, la can operate similarly, as a container around the clause, or separating it from the main sentence. I used la as a separator for a while before I realized how well it worked as a container. That is why it appears that way in the Balloon Boy interview, which is about a year older than lipu lawa pi esun kama.

Is there any way to mark the end of a paragraph without using empty space?

this one works similar to other punctuation

this one a row of pini

I have experimented with a banner under headings but generally used white space to group sections, or inserted drawings between paragraphs. My feeling towards this is: think about it as you would composing any drawing. Be aware of the entire page, and all the sentence blocks you want to fill in that space, and how compact you want the final composition. Then leave those spaces in between paragraphs, and see if you prefer them as negative (white) or positive (glyph) space. You aren’t violating any rules by adding your own separators, you are simply embellishing the drawing.

Can you please make a page which explains the origin of each glyph?

The original pictograph dictionary was written out on index cards like this: 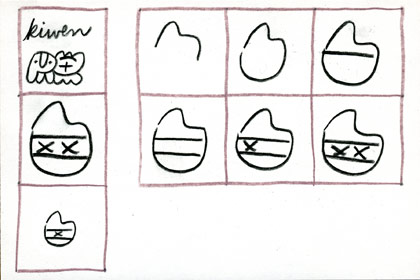 It included drawing instructions and simplified versions. Some of the original sketches also contain notes about the origin of each glyph, for instance “awen” says “anchor”. A lot of these origins though are lost even to me, I’d have to dig back through old notebooks and try and figure it out. Some glyphs came right away, and some evolved over a year or more.

What I’d really like to present would be a collection of early examples for each glyph that would illuminate the origin story well, something like what hanziyuan does for Chinese. That is a site I have gotten lost in more than once. In an unfiltered preview though, here is an example page from one of the first notebooks with sitelen in it:

A lot of Mayan hieroglyphs utilize cross-hatching as shading, and some of the earlier versions of these glyphs borrowed from this. You can see this in supa above. Slowly, most of this was simplified to hashes and x’s.

Do you create glyphs only for the words you approve of?

There was a long time when the number of ‘official’ toki pona words was stable, and no new words were added. This was during the same time that I was most actively developing the glyphs, and where the list has stayed for now. I’m not opposed to adding more, but I haven’t found myself lacking any. The most recent additions were all from around the time that Sonja was finishing the official Toki Pona book. You can see this same list as was also added as an update to jan Pije’s lessons. I think the only one missing is pu, for which so far I’ve used pu right from the syllabary.

Where can I get help with correcting my toki pona translations? (I’ve found the forums, but they seem to be really inactive.)

edit This always seems to be a moving target. I have moved all the links I have on one page to keep them updated.